Holy shit balls, what a ride…

I managed to get everything and then some done, AGAIN.  GODDAMN I’m GOOD!!!  Josh actually helped which I think made a huge difference.  It was almost as good as having him at work. 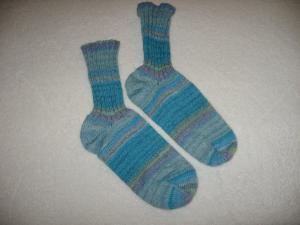 I was trying to stay up late to do fireworks with Josh and the brat, but the heat got to me and I ended up crashing around 8.  At 1am Josh got up to go to the bathroom and fell which woke me up.  He was having a hard time sleeping and by that point I’d gotten about 5 hours – the minimum my body needs to function.  I knew there was no way I was going back to sleep so I got up and sat in my chair and knit.  I finally woke him up around 8:30 and we got on with our day.  So yes, lots of knitting.

The visit was alright I guess.  She’s still doing the passive aggressive thing with the smoke, and I’m still ignoring her.  We did some craft projects this weekend that turned out alright.  I think the t-shirts look awesome.

Those are mine, with the squirrels of course.  There really wasn’t as much for her to do with this project, but I think she likes her shirt.  I think next time we might try tie dyeing.

Because my sleep got so incredibly fucked up I had a hard time last night.  I tried going to bed around 9:30 and I think I finally drifted off around 11.  When I woke up at 1:45 to go to the bathroom Josh was still up watching tv.  Not sure how he’s functioning today.  I’m running a little slow.

He was really creative this weekend.  We had got another of those kid robot forms and this time he made me a raccoon.

This one he had to add clay to and then paint to get the tail and the face done.  I think it turned out great.  He even painted the little recycle can for Trikky to hang out in.

All in all I’d say it was a pretty good weekend.  The mood has stayed pretty level and I’m feeling decent.  Just hoping the rest of this weird week works out alright.