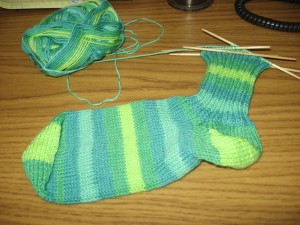 This is how the sock looks as of 2 minutes ago.  I’m guesstimating that it needs about 3 more inches.  Hopefully I’ll be able to get that done tonight and have time to start the toe of the second one.

I finally got Josh to admit what he’d done.  He apologized, sort of, but told me that he really doesn’t need to ask my permission to drink.  It’s his life and his body and by god he’s going to do whatever the fuck he wants to.

So I dropped the D bomb.

He got really quiet.  I told him I can’t take any more of this hiding business.  If he’s going to drink, he needs to admit it and I need to keep an eye on him.  I told him that I don’t trust a single fucking thing he says, including when he says he loves me.  I think that got his attention.  I also told him that the next time he does this I’ll be filing for divorce.

I know he didn’t sleep good again last night.  I had a hard time sleeping, too, and I wasn’t awake quite as much as he was, but my sleep was very broken.  He’s just blowing it off again though, so I guess it doesn’t matter.

I am pleased to report that I got everything on my to do list done and then some.  I made really good progress with finally getting our living space back in order after over a year of chaos.  The only thing that really needs to be done down there yet is my desk, and for some reason I’m avoiding it like the plague.  Maybe this Friday I’ll feel up to it.  I would say I’d do it over the weekend but we’ll have the brat again and it’s just almost impossible to get things done when she’s around.

I have no idea what to expect from this week.  I know it’s going to be busy at work – we’re heading into our busiest time of the year.  I teach later this morning and then have meetings or classes the rest of the week.  I think my only “free” day is Wednesday and I have no doubt that someone will find a way to hijack that, too.

I made decent progress on the sock yesterday.  I had kind of thought maybe I’d get it completely done, but I ended up getting busy with other things and then I was just way too tired.  I am working up the leg though so it’s only a matter of hours at this point until it’s done.  I also made 2 new crocheted coasters for Josh and I.  I made one for him to put on his nightstand and I made one for me for on the corner of the desk, next to my knitting chair.  They’re nothing exciting – just little round cotton mats.  I just figured if I’m going to be sitting in that chair knitting a lot I want to have a coaster to rest my beverage on.

I really wish I could get Josh to start picking up after himself a little better.  Again this morning before I left for work I had to completely straighten up his dresser and throw his clothes in the hamper.  And then I discovered that he spilled beer Friday night and the top of his nightstand is totally sticky.  I didn’t have time to deal with that this morning so I’ll have to take care of it when I get home.  I swear, it’s like living with a fucking teenager.

The mood is, rather obviously, not so good.  I’m really tired and I’m also really tired of the drama with Josh.  I need us to have a whole good day together – no fighting, no drama, just good.  I’m not sure when I’m going to get it.  I think I did kind of get through to him yesterday about the drinking.  I told him that I worry because I love him and because we both know that too much alcohol will hurt him.  I asked him if he would worry about me if I stopped taking my pills – he said yes.  I told him it’s the same thing.  I need enough of the right chemicals and he can’t have too much.  I think maybe he kind of gets it now.  I hope so.