The weekend was interesting.  Josh and I got along some, we fought some, I got a lot of things done…  I guess I’d say it was kind of a wash.

Friday night he drank his beer, as per usual.  He got himself very drunk, but behaved for the most part.  I stayed up with him to make sure he didn’t get into too much trouble.  Around 2 something he rolled himself out of bed again.  This time he smacked his face on the nightstand.  It woke him up just enough that he didn’t stay on the floor to sleep.  His eye looks terrible. 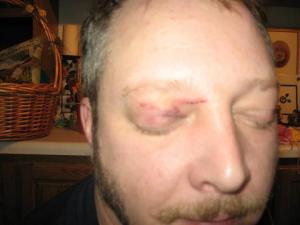 this is what getting drunk can do to you

He woke up fairly easy in the morning and we had a mostly pleasant day.  His friend Jeremy came over for dinner and more beer drinking ensued.  Again, I stayed up with him to make sure he didn’t get into any trouble.  Sunday morning it was near impossible to get him up so we started fighting again right off the bat.

Most of the day Sunday wasn’t too bad.  We ran some errands for my mom and got some things done around the house.  I even managed to fix a light fixture.  That was pretty cool.  But while we were doing that he got frustrated and we fought some more.  Apparently my jokes weren’t funny to him.

Anyway, we had some quiet time in the afternoon and things seemed to be fine.  I got the second sock started while he was watching tv.  We went upstairs to start making dinner and again the tv got turned on.  He cooked for us and we had a pleasant meal.  After we got everything cleaned up we went back downstairs and I started knitting again.  He ignored me, entirely.  The tv show he was watching was apparently way more important.  I finally got tired of listening to it and decided I’d go upstairs where it was quite.  He flipped.  I tried sitting on the bed to knit but he kept ignoring me and I got pissed.  Usually when he watches tv he talks to me a little.  Not last night.  So I said something and we started fighting again.

We finally got things worked out and I tried to go to sleep, but I couldn’t.  The noise was just too much for me.  I had hoped that when the tv turned off at 10 that he’d go to sleep and I’d finally be able to, but apparently he was having heartburn so he stayed up until midnight.  Which of course meant I stayed up until midnight.  I finally told him to put his fucking Nook down and go to sleep.  I still didn’t sleep good.  And of course that means this morning I feel like shit.

I just don’t know what to do about him.  He doesn’t seem to have any kind of consideration for anyone else.  And he constantly wants that fucking tv on.  I’m really amazed that he gives me the time after work without any electronics – I swear he’s addicted to them.

I did apply for a part time job last week, but I haven’t heard anything yet.  I told him I was going to so that I didn’t have to be home with him anymore.  I’m really sick of competing with all of the electronics.  Besides, I’d like to have a little money I could spend on myself for a change.

Work will be super busy this week.  I’ll be working until almost 7 on Wednesday and Thursday.  My calendar is starting to look like a Tetris game gone bad.  And of course Josh doesn’t care.  The only thing he’s concerned about is who’s going to cook his dinner when I’m gone.  And I’m sure those nights I’ll have to come home and make his fucking sandwich and take care of his coffee for him.  Lazy bastard.