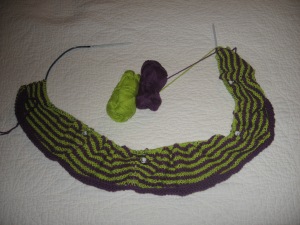 That’s how the sweater looks as of just a few minutes ago.  I’m officially sick of it for today.  Time to work on something I might actually finish this weekend.

So far today I have…

ALL of the normal weekend chores are DONE.  I have ample time to play to my heart’s content.  It is snowing like fuck outside and I have pretty well decided that since there is nothing on my calendar tomorrow, I’m going to stay home again regardless of whether or not the university closes.  NYAH!!!

I’m off to see if I can’t finish Josh’s slipper and start the second one.  I’d like to get that project completely done this weekend so that I can start the shrug for the brat.  Toodles!

IT WORKED!!!  IT TOTALLY FUCKING WORKED!!!  Dave Walker left me a comment yesterday saying that some of his teacher friends will wear their pjs inside out when they’re hoping for a snow day.  I told my hair dresser about it and she said the kids around here call that “rallying.”  So I tried it and it totally worked.  YAY!!!  They’re still not sure about tomorrow – it’ll depend on how bad we get dumped on – but still, a bonus day is a bonus day.

Have I mentioned I’m a little excited about this?  HOLY FUCKALEULIA!!!

Ok, on to a little business…

Swearing.  I’m a big fan of it.  However, seeing as I’m allegedly a “professional,” I can’t always drop the F-bomb at work.  So I’ve come up with just a few alternative things to say when I want to express myself.

Those are my big three.  I’d love to hear from y’all what kinds of creative things you say when you can’t say what you’d really like to.

Birthdays.  My birthday is next month, precisely one month from today.  I’ll be 37.  I never really entertained the idea that I’d make it past 27, so I’m sort of flying blind here.  I know that most Borderlines see marked improvement of symptoms after they reach 40.  IF they reach 40, that is.  For a long while I wasn’t sure I’d ever get that far.  Now I’m pretty sure I will, and that’s both encouraging and scary as hell.  I’m trying to start planning for the future, but cautiously.  My big “long term” goal right now is the Master’s degree.

I don’t really want anyone to make a huge fuss about my birthday, I never do.  It would be nice if Josh would make me a little something – maybe a new belt – or perhaps get me a few flowers.  I don’t need a big production though.

Dreams.  Dreams and birthdays kind of go together.  How dare I dream if I don’t really believe I’ll be here to see them come true?  I’m working on this.  My biggest dream right now is that one of these days Josh will make good enough money that we can move out of my mom’s basement into a house of our own.  It’ll take some time and some work, but that’s what I’d really like.  I’m trying to allow myself to start dreaming again after many years of feeling like it was a waste of time.

Judge not, lest ye be judged.  This is sort of a running theme with me that surfaces periodically, usually because I hear of someone else having a hard time with being judged about something they said or did.  I guess I’m really lucky – only those closest to me really know what’s going on with my mental conditions.  I’ll occasionally drop the odd tidbit on Facebook, but not like the kind of details I give y’all.  The general public I deal with has no idea what’s going with me.  I can pretty well pass for normal most days.  But I don’t think it’s right to judge anyone, and I try real hard not to.  Until you’ve lived a day in my life, you have no idea what it’s like – and that goes the same for other folks.  Until you well and truly know their situation, don’t judge them just because they’re different than you.  Be nice kids.

Today.  Ah yes, today, the snow, the laziness…  Oh wait, no laziness here.  I plan to be uber productive and get all kinds of shit done.  I’m going to run some laundry, vacuum, clean up around here, and – most importantly – KNIT.  I’m going to finish Josh’s first slipper and spend some time with my sweater.  I also need to start the brat’s birthday present – I’m making her the same shrug I just made myself, only in multiple colors and in her size.  Her birthday is a week before mine, but that shrug was so easy I don’t think it should take more than a day to make.

So many things, so little time…

Josh and I are getting along splendidly right now.  This is going on 2 solid weeks of damn near constant awesome.  We’ve had some minor hiccups during the days, but nothing that lasted very long or required major work to set right.  I’m really enjoying it and I’m trying to see just how long I can make it last.

The mood right now is phenomenal.  Nothing like a bonus day to brighten your spirits.  Josh starts his new job on Monday and is in fine spirits himself because of that.  It should be a truly awesome day.