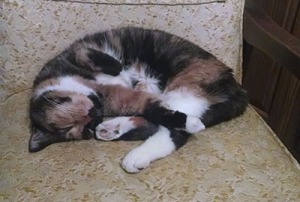 Today was my day to work from home. It ended up really well, but not for the reasons I had expected. Y’all know Evie Cat by now, that’s her curled up with her toes up there. Because I was home today I was able to see that she was hopping in her potty box every few minutes, but not leaving any deposits.

After witnessing this for a bit, and then having her look at me and cry while she attempted to pee, I called the vet. Poor girl has a bladder infection. They gave her injections of antibiotics and an anti-inflammatory and a liquid pain medication. Just before they did the injections she was kind enough to pee all over the exam table. And my hand.

We’ve been home since around noon and she seems to be a little less uncomfortable, but she still isn’t always peeing when she gets in the box. She’s a little stoned from the pain stuff – she tried to do her usual jump from the bed to the dresser and got tangled up in her feet. She’s ok, just embarrassed I think. And she’s hardly left my side since we got back.

I had a regularly scheduled med check with shrinky-poo this afternoon. I told her I’ve been having trouble sleeping, that I seem a little irritable myself, and that it feels like my boss has it in for me. She asked all of her standard questions – am I spending money I shouldn’t, how’s my appetite, can I still concentrate, what’s my energy like, have I gained any weight. Everything is good except for the sleep.

I’ll be increasing my Depakote by 1 pill every other night. Thank gawd for pill trays – I would never keep that shit straight. Since we’re doing this sans blood check, I may end up with toxicity. Depakote toxicity and Lithium toxicity present exactly the same way – the appearance of being shit-faced. You slur your words and your coordination goes right down the shitter. But you’re stone-cold sober.

I was faced with a dilemma at that point. I needed to let my boss know that I wasn’t really taking nips off a flask in my office, but that meant talking to her – she who has been causing me some anxiety lately. So I sucked it up and called.

And she acted as though nothing was wrong.

I have no fucking clue at this point if it was all in my head or if hearing me talk about Evie peeing on me put her in a better mood. We may never know. All I know right now is that I’m not completely dreading going in to the office tomorrow. 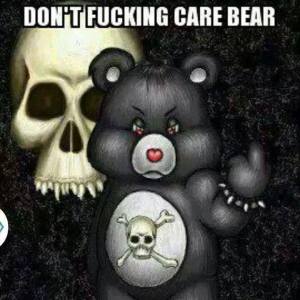 Mom suggested this week’s top 10 list, which means she’s probably trying to figure out what I’m going to cook for her dinner this week.

Inquire for recipes if you feel so inclined; none of these are closely guarded family secrets or anything.