Evie Cat, family, getting healthy, life, losing weight, random shit that falls out of my brain, the world is full of fucking idiots

At the end of my second full day logging my food, I’ve come to a very startling realization. 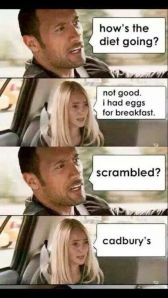 I’m fat because I eat too fucking much food.

On the plus side, I’m getting high off Sharpie fumes from the 5 new CDs I just finished to put in the car. Very shortly I’m not going to give a shit about anything.

But the new comforter for the bed arrived and yesterday Mom brought home some new treasures that she rescued from my sister’s trash can, namely a very lovely mirror for my office, a large print of an orchid plant that I hung in the basement bathroom (nothing says class like orchids in a bathroom with a bare concrete floor AND a litter box), several new throw rugs for the bathrooms (which are damn near new), and a beautiful HUGE Longaberger basket. (closest I can find to it is this, but this fucker has a solid wood lid and might be bigger) She had just chucked all of that stuff into the trash because she was tired of it. So Mom rescued it, I kept those bits, and there’s still more that I didn’t want that’s going to Goodwill when I make my drop off later this week.

Anyway, I’ll pop back in tomorrow with pictures. The living space is coming together nicely and Evie seems to love the new bedding.