doodles, drawing will save my life, getting creative, goals, life, mental illness, motivation, my salmon and noodle casserole is the shit, random shit that falls out of my brain, recipes, school, zentangle doodles

That is sooo much funnier when you say it out loud to a little kid.

I am STILL fighting with the cold/flu/black plague that I caught over the holiday break. I haven’t had to take a decongestant more than a few times, and always at night, but I’m still running the humidifier by the bed and every morning in the shower I expectorate crap from my lungs. Before you blame my filthy little smoking habit you should know that it is a rare day indeed that I smoke more than 6 cigarettes. The worst part of all this is the utter lack of energy. By the time I get home from work and take care of the little household bits I’m pretty well spent. This is making getting homework and projects done quite difficult.

Doodling got me through class last night. That woman is pushing the limits of my meds, as they all seem to. Fortunately the little notebook I’m using has a light pattern of large diamonds on the pages that made a lovely backdrop for a little zentangle-ing. That and writing shitty notes to the prof in my notebook will get me through this. Well, that and the nice gal who sits next to me and the hip young gal that I smoke with.

I got the heart doodle outlines finished last night, but I had already turned off my phone so I didn’t take a pic. (does anyone else actually turn their phone off at night or am I the only one?) I thought maybe I’d start going over the outlines with black marker but by then my hands were not at all steady. Maybe tonight. I’m thinking it’s going to be amazing for on a t-shirt or something. And Mom wants it, too. It’s probably just me but I think it’s pretty fucking awesome.

And now for something completely different…

I’m still working on the whole simplifying business. I think I have entirely too many clothes. Josh argues that I am a woman who works in a professional field so I need a lot of clothes. I call bullshit on that. But right now doesn’t seem like a great time of year to be making too many decisions because the weather around here is utterly ridiculous. (but really, what the fuck does that have to do with anything?) I don’t want to get rid of things I’ll need when it really warms up but I don’t want to keep a bunch of shit I’ll never wear.

I’ve been reading all sorts of articles about people paring down and that inspires me but I’m still feeling the pull of consumerism. I still want to buy stuff even though I know that won’t make me happy and will likely make things even worse. And then I read this post this morning and was comforted to know I’m not alone.

Is anyone else trying to pare down or simplify this year? How’s it going for you? Do you have any tips or suggestions to share with the class?

And here’s where I change direction entirely. The recipe I mentioned the other day…

Boil the noodles until tender, adding the peas during the last minute. Drain the salmon and flake. Combine all other ingredients except FF onions in a large covered casserole dish. Drain the noodles well when done boiling and add to the casserole along with the salmon. Stir well until everything is combined. Cover and bake at 350 for 30 minutes. Uncover, top with onions, and bake another 5 minutes.

Sixty-four ounces of iced coffee is probably too much.

My access card didn’t work again this morning, but today I was armed with the visitor code and the knowledge of which gate to use it on. I have since procured a new card, at no charge, and with a much better picture. Hopefully tomorrow morning it works.

I did get my homework done yesterday (did I already tell you that? can’t recall). This afternoon I think I’ll spend some time trying (TRYING) to work ahead a little.

I’ve managed to go through FB and unfollow several people/pages. It’s helped. I also went through both email accounts and cleaned things up. On a non-digital note, I got pissed at all the printed articles in my office not really being accessible in a useful way and set my file tree back up and put the whole mess in manilla folders.

Today was day two of the Great Hibiclens Cleansing Process. It’s a special high potency antibacterial liquid stuff that I’m supposed to use when my skin is acting up. It’s not really a big deal except that I’m supposed to leave it sit on my skin for 5 minutes which is just a tiny bit tricky while attempting to finish showering. Only five more days of this shit to go. Yay.

While looking for a stash of printer paper that evidently doesn’t exist I found the missing black coffee mug. In a file cabinet. And no, I didn’t put it there.

In my effort to relax last night I decided to doodle again. 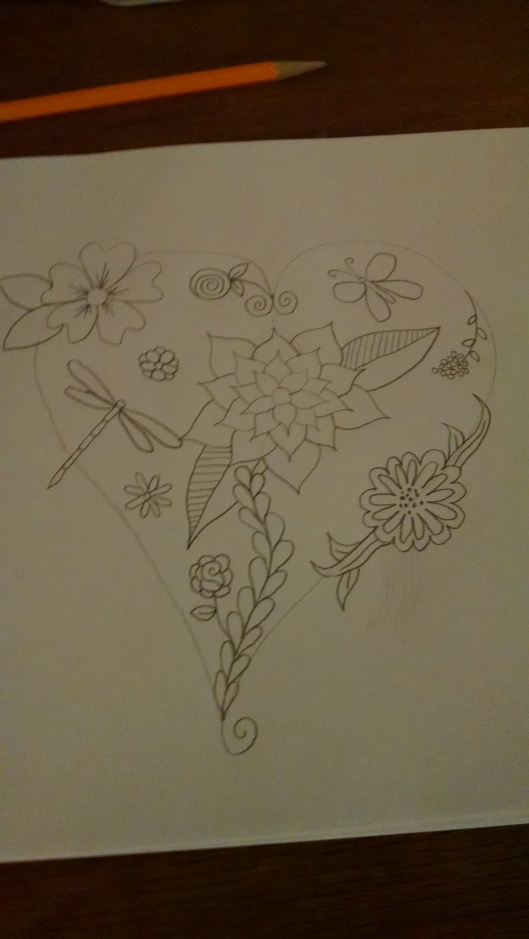 Not done yet and still just in pencil, but I’m quite liking how this one is coming together. I couldn’t figure out how to finish the first one last night so I thought, what the fuck, I’ll just keep doodling. Totally loving the shit out of this stuff.