random shit that falls out of my brain, tattoos

I’m admittedly rather tired right now, so this might not be quite as awesome an idea as I’m thinking, but who else would be interested in doing a “show your ink” post next Friday? Either y’all can send your pics to me and I’ll make one big post or we can all do our own posts. I’m thinking there’s a lot of us with body art out there and I’d love to see what adorns my pals. Comments, please.

I’m thinking maybe I confused some folks with the whole “weekly feature” thing. I’m not planning to start the 7 Weeks of Weird thing until July so that everyone who wants to play along has plenty of time to get ready. I just kind of like the idea of Wednesdays being reserved for weird shit. So yeah, there ya go. Having said that, if anyone else wants to jump on my weird ass little bandwagon and devote Wednesdays to weird stuph, feel free and you’re more than welcome to swipe the banner. The more weird the better.

In this inaugural WW post I think I’ll do a list of randomly weird things about yours truly. (mostly because I have no fucking clue where to start this train wreck in progress) 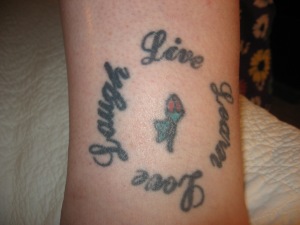 Tattoos have played an integral part in my life since I was 21.  I’ve always been fascinated by them – both the artistic design and the stories they tell.  These are my stories.

The tiny rose was my very first tattoo.  I was just shy of my 21st birthday and freshly divorced.  My ex husband was totally against tattoos, so as soon as I could I ran right out and got one.  The wording around it was done for my 30th birthday, immediately after I was diagnosed.  I’ve always had an affinity for roses and the words are my personal mission statement.  They read “live learn love laugh.”

My second tattoo was done to celebrate my third anniversary with Rob.  Neither of us had made it that far with our first marriages so we thought we should mark the event somehow.  I really thought I’d be with him forever.  He has the exact same tat in the exact same spot.

outside of right ankle, done in December 2005 for christmas

I was majorly manic when I got this one.  The dragon is my Chinese Zodiac symbol.  It’s wrapped around a yin-yang symbol to show balance.  The dragon faces my back because I feel like he gives me strength and is watching my back for me.

Another piece done after a hospitalization.  Butterflies have always meant new beginnings for me.  I had hoped that this one would mark the start of a new chapter of my life.  Yeah, not so much.  Done in December 2008.  Quite possibly the most painful tattoo I have.

The swag of roses beneath the skull were done in March 2007 for my 31st birthday.  I think they’re just lovely.  I was progressing through treatment at that point and not feeling very pretty.  The dragonfly on my right shoulder was the result of pressure from Jason – the ultimate douche.  That thick black swirl is actually covering his name.  I would have gotten that one and the bee during the same time span – I’m thinking mid 2009.  The sugar skull was done in June of 2010 and is based on an original drawing by Josh.  It took longer than any other tat I’ve got and hurt like a bitch.  To me it symbolizes rebirth and new life coming out of the struggles I’d been facing.

inside of right wrist

Sorry for the utterly shitty pic – it says Serenity and those are butterflies circling it.  I got this in February 2010 after I got out of the hospital for the last time.  That was my most serious suicide attempt and it really did damn near kill me.  I spent nearly a week in ICU and then another week in the special care psych ward.  I wanted something to remind myself that life will always be rough, but it always gets better. 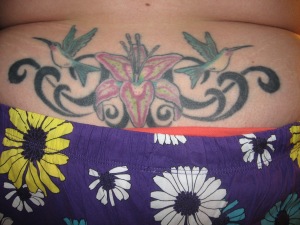 My lower back piece was done in March 2010.  I was in the middle of my first Master’s degree and I decided that I would reward every A I earned with new ink.  This one is just lovely and reminds me of my aunt, Eileen.  She had a thing for hummingbirds.  (excuse the ultra sexy pj pants) 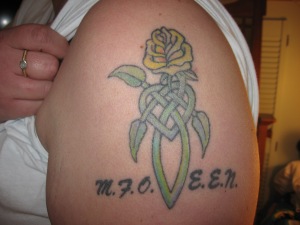 This one was done to memorialize my grandmother and my aunt.  The yellow rose is for remembrance, I love all things Celtic, and the initials are theirs.  Done in May 2010. 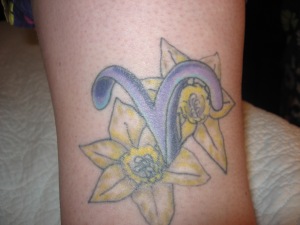 This is the newest of my tats, done in August 2010.  It’s my Zodiac symbol (Aries) and my birth flower (daffodils).  Josh absolutely hates this one but I don’t so much give a fuck.  I’m proud of being an Aries – it’s a big part of who I am.  And this is my body, not his, so he really doesn’t get a say.

That’s all of them.  I love each of them and don’t have a single regret.  They’re a part of who I am and who I’ve been.  I’d like to get more some day, but money just isn’t really flowing right now.  I’d love to see your tats and hear the stories behind them.

I started having a conversation with merbear74 this morning about pain.  She’s needing some meds to deal with chronic pain and I wished her the best of luck.  Pain meds don’t do shit for me – none of them.  I mentioned that I have an insanely high tolerance for pain, hence all the tattoos I have.  So I thought I’d share a pic of 4 of them.  I have 13 total.  The skull in the center was designed by Josh.  It took nearly 3 hours to do and hurt like hell.  But I love it.

Pain doesn’t usually seem to bother me too much.  I will sometimes take a Fioricet if I have a wicked headache, and now and then I’ll take a Tylenol Arthritis for my back, but that’s about it.  Vicodin does nothing, Hydrocodone does nothing, hell, Oxycodone does nothing – so why bother?  Just one of the many oddities about me I guess.

I got nothin’ today.

Well, almost nothing.  I have some pics to show you. 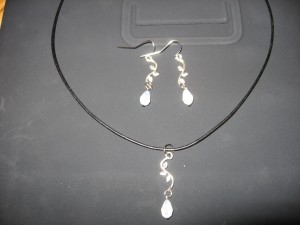 That’s the jewelry I ended up making for my pal, S, at work.  I had wanted to do something different but the bead store didn’t have the right parts.  I’m pretty happy with how this turned out.  It’s very much her style.  Can’t wait to give it to her later this month. 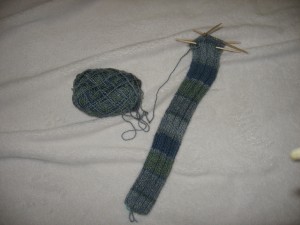 It’s up to 13.5″ now, which is good.  I’ve got it with me again today so I can try to make a little more progress during lunch.  It’s just so fucking BORING.  Because of this I started working on a new bag last night.

Here’s the idea – knit a huge tote bag that is very like my favorite purple purse.  Make it nice and big, with a pocket on the outside, two handles long enough to sling it over my shoulder, and then felt it so it’s nice and dense.  Embellish with knit and felted roses and leaves and then needle felt some vine-y tendril like things around the rose/leaf areas.  I know I can do it, I’ve done this sort of thing before.  Just need to find time.  I cast on for it last night and got the first row done before I lost the ability to concentrate.

my favorite gift from Josh

I’m pretty sure I’ve mentioned before that shortly after we started dating, Josh got me this really cool flower ashtray.  This is it, in flower form, sitting atop a doily I crocheted eons ago.  The flower needs to be polished, but we’re not sure what would work on it.  The doily needs to be blocked, but I’m too lazy.

Things at home seem to be going fairly well.  We had a brief dispute last night when we first got home, but we settled it peacefully and everything the rest of the evening went smoothly.  This morning he got up fairly easily and so did I.  I actually made it into my office by 6:25.  It wasn’t like I was rushing to get here, it just kind of worked out that way.  I even took time at home this morning to write out a check for a bill and make the bed.  Apparently some days I’m just more on top of my game than others.

The mood is coming down a little, but not too bad I don’t think.  I was still able to get some things done last night at home and this morning I’m getting through my usual morning routine.  Need to think about having a quick smoke break and then dusting.  I have no doubt that today will be a semi-productive day.  I’m not feeling depressed at all yet, just a little slower than normal.  I went to bed before 8 last night and slept kind of in fits and spurts.  Not sure what that was all about but I feel fairly rested this morning.

I leave you with one final photo…

That is my favorite tattoo.  Josh designed it for me and my favorite tattoo dude inked it for me.  It’s on my upper back, in the middle between my shoulders.  This pic was taken just hours after it was finished which is why her teeth are still kind of bloody.  It’s beautiful and it’s so me.